Today’s post includes two scans of material from Nëndori, the monthly literary and artistic journal published by the Union of Writers and Artists in Albania during the socialist era. I’ve recently spent some time with several critical essays published in the pages of Nëndori [later Nëntori] in the late 1960s and early 1970s in preparation for a paper I presented at ASEEES 2019 (and an associated journal article), and I wanted to share two resources that I’ve found particularly useful. 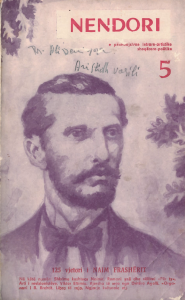 The first is an essay by the critic Andon Kuqali (who I’ve discussed in other posts) entitled “Art dhe Revizionistë: Shënime për artin sovjetik të viteve të fundit” [“Art and Revisionists: Notes on Soviet Art in Recent Years”], published in Nëndori 5, 1971. This essay is one of the more interesting and thorough attempts to point out the ideological and aesthetic shortcomings of late socialist art in the Soviet Union, from the point of view of non-aligned Stalinism (the path Albania had taken by this time). In it, Kuqali argues against both what he calls “monumental falsity” [fallsitet monumental] and the so-called “strict style” [stili i rreptë in Albanian, surovyi stil in Russian], as well as against the “mysticism” of Soviet artists such as Dmitry Zhilinsky. The essay is one of the few pieces of writing published at the time that is illustrated with examples of some of the works criticized (albeit in poorly-reproduced, black-and-white images), and it shows Kuqali engaging with specific works and pieces of writing published in the Soviet sphere. 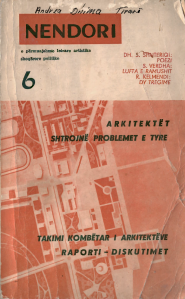 The second scan today is the following number of Nëndori, which contains the reports on the discussion of the first annual national meeting of architects, which took place on May 6, 1971. This selection of texts includes the main address given by Sokrat Mosko, a member of the directorial committee of the Union of Writers and Artists, as well as shorter speeches given by architects, artists, critics, and writers, including Fadil Paçrami, Kristaq Rama, Enver Faja, Valentina Pistoli, Petraq Kolevica, and Foto Stamo. Just as interesting as these discussions–which give a vital snapshot of the state of architectual and urbanist discourses in Albania at the outset of the 70s decade–is a portfolio of photographs that follow the reports. This selection of photos documents a plethora of socialist modern (and modernist) buildings constructed in Albania in the first decades of the communist period. These range from factories to apartment buildings to hotels, from bridges to a lapidar. 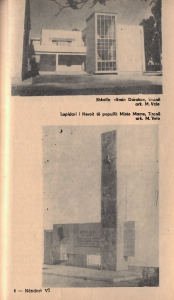 Of particular interest is the fact that Maks Velo (the architect of the lapidar commemorating Misto Mame, juxtaposed in the portfolio against his equally modernist architecture for the ‘Emin Duraku’ School in Tirana) is also featured on the back of this volume of Nëndori, with a primitivist illustration of women dressed in folk costumes. 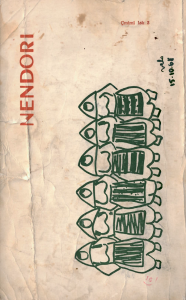 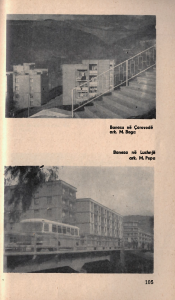 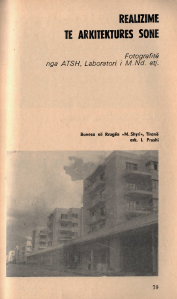 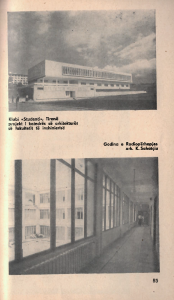