Today’s post is a full scan of Albanian photographer Niko Xhufka’s album Ritme të Jetës Shqiptare [Rhythms of Albanian Life], published in 1976. Xhufka was one of the finest photographers working in socialist Albania, and his works evidence the originality and aesthetic force of Albanian documentary and socialist realist photography during the socialist years. 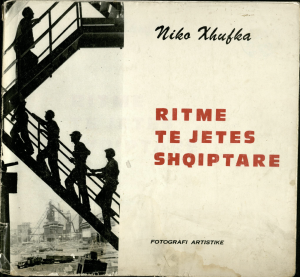 Most studies of photography as it has developed in Albania have focused either on earlier phtographers, such as the Marubis, or else have treated socialist photography in the country as little more than a means of propaganda. Xhufka’s images are striking because they are so obviously ‘artistic’–richly indebted to and conscious of a tradition of avant-garde, realist, and socialist realist photography–even as their ideological content is plainly legible. It is truly impressive to survey this collection of works and see Xhufka shift effortlessly between dynamic, abstract compositons that recall Russian avant-garde photography; clear and legible compositions emphasizing the narrative clarity of socialst realism; and sweeping aerial landscape panoramas.

While the entire album is a treasure, my favorite image is certainly a pair of juxtaposed photos entitled Zëvendësimi (Myzeqe) [Transplantation (Myzeqe)]. The first of the images shows a pair of storks nesting atop a twisted tree against a background of gray, flat fields. In the second image, the stork’s nest sits atop the skeletal structure of an electrical tower, and bottom edge of the photo is filled with stalks of grain or hay.  The image succinctly pictures the ‘modernization’ of Albania carried out under socialism in a way that is both iconographically and compositionally striking.

* Several years ago, I first came across Xhufka’s work at propagandaphotos, and I am indebted to that blog for drawing my attention to a truly amazing artist. This interview with Xhufka offers important information on his work, process, career, and life.

Today’s post is a special one: a complete scan of the 1969 publication Ushtria Popullore në Artet Figurative [The People’s Army in the Figurative Arts], a massive publication featuring paintings, sculptures, prints, and posters chronicling the glories of the Albanian People’s Army. The book should be invaluable to anyone studying Albanian art and culture in particular, or socialist realism in general.

The album features a number of works I’ve never seen published elsewhere (including works by Edison Gjergjo, Danish Jukniu, and Isuf Sulovari) and, with over 100 illustrations, represents on of the largest collections of visual art published during socialism in Albania. Some of the images are in color, others in black and white, and their quality varies drastically, but some of the reproductions are quite clear and details are visible.

This is the twelfth in a series of posts containing PDFs of texts that may be of interest to those studying Albanian socialist realism. More posts with critical content are in the works, but for the time being I’m too busy to do anything except scan more documents…

Today’s post contains selections from the September 1977 issue of Nëntori. The first selection is Dalan Shapllo’s fascinating “Mësimet Konsekuente Revolucionare të Partisë dhe të Shokut Enver: Mbi Letërsinë dhe Artin,” a review and ‘study guide’ for Mbi Letërsinë dhe Artin, a collection of Hoxha’s writings and speeches on the subject of literature and the fine arts, produced between 1944 and 1976. (The full text of that book is available here.) Shapllo concludes his review of the collection by drawing the reader’s attention to two sections of the book in which Hoxha made concrete statements and suggestions regarding the realization of works of art. The first is, of course, the well-known letter written (in 1969) by Hoxha to the trio of monumental sculptors Kristaq Rama, Shaban Hadëri, and Muntaz Dhrami in connection with the realization of the Independence Monument in Vlora. The second is the 1962 statement made by Hoxha to the Shkodran creators of the drama Plaku i maleve [Old Man of the Mountains], devoted to Bajram Curri. Shapllo points out that in both cases, one of the key ideas expressed by Hoxha was that the ‘great figures’ of Albanian history (Ismail Qemali and Bajram Curri, respectively) should be depicted as acting in close concert with the masses. Shapllo notes that Hoxha’s aesthetic interventions can be summarized as expressing the following two key principles: “1) Historical works [of art] must be characterized by revolutionary ideas, thus preserving their historical truth; and 2) the relationship of the masses and of the hero must be conceived as a dialectical and materialist one, in order to show that the masses create history and heroes can emerge from the masses and play a positive role only when they embody and reflect the interests of the people” (19). As formulaic and ambiguous as these principles might be, one can’t help but think that they might prove instructive for current politicians and artists in Albania.

Also of interest is the second part (I regret that I don’t have the previous issue of Nëntori, so I can’t offer you the first half) of an essay by aesthetician Alfred Uçi entitled “Arkitektura dhe Estetika.” Uçi, the author of the monumental Labirintet e Modernizmit, was one of the most prolific and distinguished aestheticians of socialist Albania, and his analysis of the relationship between architecture and the other arts—including the factors that distinguish socialist architecture from Modernist formalism—is enlightening for anyone interested in considering the precise character of the relationship between representational art and abstract arrangements of space and form in socialist Albanian culture.

Finally, the issue contains several great prints and drawings highlighting the activity of the Albanian youth in aksion in agricultural development.

This is the eighth in a series of posts containing PDFs of texts that may be of interest to those studying Albanian socialist realism. Initially I had planned to write thorough descriptions and analyses of the content of the documents, but I barely have the time to scan them, much less write extensive commentaries.

Today’s text is the complete volume Shënime për Pikturën dhe Skulpturën, published in 1987 by Albanian artist and critic Llambi Blido. Blido is quite an interesting figure in his own right; as a painter and as an illustrator of children’s publications, his works often experimented explicitly with stylistic strains of Modernism that—by the mid-1970s in Albania—came under harsh institutional criticism as ideologically dangerous. (See, for example, his Vajza në Pultin e Komandimit [Young Woman at the Controls](oil on canvas, 1971), hanging in the National Gallery of Art in Tirana and visible here. Toni Milaqi’s text “Emancipimi i Gruas dhe Ndikimet e Huaja” provides an insightful overview of Blido’s career and significance. An interview with Blido from 2009 is available here.)

Blido’s Shënime për Pikturën dhe Skulpturën is a collection of essays written, it seems, throughout the artist’s career up to that point, thought since the original sources and dates of the essays are not given, it is a bit difficult to determine their chronology. Some (particularly the exhibition reviews) are clearly from Drita, the weekly publication of the Albania Union of Writers and Artists, while others may have appeared in Nëntori (the aforementioned Union’s monthly journal) or elsewhere. Despite the lack of information about original publication (and indeed some may not have been previously published), the breadth of the sort essays is impressive and insightful. Blido’s writings span both analyses and interviews, and he engages with many of the greatest figures from Albanian twentieth-century art, including Abdurrahim Buza, Kristaq Rama, Mumtas Dhrami, and Vilson Kilica. While the book is not illustrated, images of several of the major works discussed can now be found floating around the internet. Blido’s observations are particularly enlightening given the specificity of many of his aesthetic discussions (a specificity sometimes—often intentionally—lacking in official discourses on art from the socialist period); he discusses the details of color and composition, and asks important aesthetic and ideological questions based upon these formal observations.