This is the first in a series of posts containing PDFs of texts that may be of interest to those studying Albanian socialist realism (and 20th-century art in general, because socialist realism is some of the 20th century’s most intriguing art). Initially I had planned to write thorough descriptions and analyses of the content of the documents, but that seemed unnecessary—the goal is primarily to make these resources available, and only secondarily to offer me a venue to ramble on about them. So, without further ado: 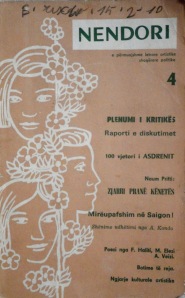 The first text is the portion of the April 1972 volume of Nëndori devoted to the papers delivered at the 1972 Writers and Artists Union Plenum on aesthetic criticism (held on February 24 and 25). It contains a keynote address by painter Vilson Kilica, then the general secretary of the Writers and Artists Union. This fact alone is interesting, since ’72 was the year following Kilica’s creation of the work Brigadieret, one of the more overtly Modernist works produced in Albania during the period. (In 1972, Brigadieret was printed on the back cover Shqiptarja e Re and, I believe, Ylli.)  It was also the year prior to Kilica’s expulsion from the leadership of the Union for his “liberal viewpoint”.

Of the essays included, one of the most interesting is “Kritika të Orientojë e të Hapë Horizonte për të Ardhmen” [“Criticism Orients and Opens Horizons for the Future”] by Andon Kuqali, one of the most (in my view) perceptive historians/art critics of the Hoxha years. Kuqali’s essay is insightful and intriguing for many reasons, but especially because of Kuqali’s clarity in articulating the necessity for interpretation on the part of the artist in creating the work. This interpretative stance was one of the hallmarks of the Marxist orientation towards artistic production, but it is (in my opinion) too often understood in a shallow way, as propagandistic deception (i.e. critics and historians treat the ‘interpretation’ called for by socialist realism as a ‘lie’ because it was not ‘real(istic)’). In fact, Kuqali rejects the possibility of the straightforward depiction or understanding of historical events. He insists:

We can in no way accept the correctness of the assertion that there are works that [simply] illustrate “historical facts.” […] From an eclectic position, the proponents of this assertion wish to accept the compatibility of the existence of an archaic and academic art with one that is innovative and revolutionary, to defend academicism. In doing so, art’s interpretative, conceptual-emotional essence is taken away from it. For even historical works cannot become artistic unless they express the aspirations, ideas, and worldview of our time, and for us, the worldview of the working class—the most advanced viewpoint in our times. (81)

With this essentially Tolstoyan declaration, Kuqali sets forth one of the tenets of (socialist/) realist art and criticism: that art must be an interpretation, and must be interpreted by criticism, in order to be realist. For Kuqali, artistic realism is also fundamentally metaphorical (which is to say that the socialist realist understanding of reality is metaphorical), and as such any attempt to simply paint ‘the world’ flounders in naturalism. While it has been said many times, I think it bears repeating: the perceived distance between socialist realist artworks and the ‘reality’ that prevailed in socialist countries is only significant if one assumes a literal model for (understanding and encountering) reality. While there has been sufficient theorizing on art, language, and other phenomena to  cast this model into some doubt at a general level, it is enough to restate the obvious in this particular context: when one looks at “the reality of socialist life” in socialist realism, one is looking not just at a metaphor for reality, but reality as metaphorical.

For those who do not read Albanian, I have also translated one of Kuqali’s articles, published in Drita in 1971. Its subject is Epika e Yjeve të Mëngjesit [Epic f the Morning Stars],the work that ultimate saw its author, Edison Gjergjo, imprisoned. (I have also posted my images of the article below, for those who read Albanian, with apologies for the poor quality of my snapshots.) It is interesting to consider not only Kuqali’s relatively lax critical attitude (from reading his criticism, one would not immediately assume the work went on to be so harshly denounced by the state). It is also, I think, an example that fulfills Kuqali’s own call, in his talk given at the plenum, for an aesthetic criticism that says what is in the work, not only what is not in it (which, as he notes, was all too common in communist Albanian criticism). It also praises Gjergjo—with mixed praises, to be sure—for his interpretation of the scene, for bringing his own aesthetic experiences to the depiction of a scene that still maintains a link to the reality of socialist life (albeit a confused and contradictory one).

On the one hand, a use of color, a manner of composition, and a style not normally seen in our exposition; on the other hand, a complex and contradictory inner content—these factors made Edison Gjergo’s Epic of the Morning Stars [Epika e Yjeve të Mëngjesit] hold the viewer’s attention in the midst of a great number of other works in the most recent exposition in the national art gallery.

The theme of the National Liberation War has been a continual source of inspiration for our art. All our writers and artists, including painters and sculptors, have captured and dealt with not only the significant historical events of the war, but also other aspects of this great epic of our people. The subject of Gjergjo’s tableau has originated and developed against this historical background. His works speaks of happenings and ideas that characterize the century—that are perhaps even eternal. A deep, blue night, filled with stars; a village or a castle, or a still-standing mass of rock; people, partisans, villagers: full of feelings and thoughts, great, monumental. In their midst the ancient song of the rhapsodist, which comes from centuries ago and enters into new struggles, into bloody and historic wars.

A shade of blue enriched by the human figures and the twinkling of the stars: it is the atmosphere of beautiful evenings, those pure and dreamlike evenings of summer. Within this expanse of blue, the dark shadows; the deep tones of red and violet; the silent silhouettes; the sublimation of the rhapsodist, with his head hanging down, and of the partisans, with their rifles in their hands; the attention that one woman partisan directs at the blood red rose she grasps in her hand—all of these aspects create disturbing ideas and give a sad, tragic note to the work. All of this—within a closed, square composition.

Entitling his work “Epic of the Morning Stars,” Edison Gjergjo has attempted to convey his thoughts and ideas to us by means of words. But this title, it seems to me, is somewhat incomprehensible, and is of little help to us in grasping the substance of the work, for the title in figurative works is an accessory perhaps even further outside the work than the frame or the pedestal. However, in this case, it does offer us some insight. The tableau speaks of the idea of a long history, a history of centuries; of the epic, dramatic, and tragic wars of our people; it tells of the history that is carried on by the rhapsodist, that stands beneath the looming boulder, that is in the roots of the struggle of the young partisans on this blue, starry night, from which will emerge the new day and the new epoch. But this new epoch emerges, through the painting, together with both the partisans and their rifles and with something mysterious, calm, and quiet.

This slightly confused complexity and the contradiction between the foundational idea of the work and the truth of the historical moment arise from the artist’s uncertain emotional and artistic attitude and a wavering attempt to find his own path, his own creative personality. They also stem from a kind of nostalgia for the past which has taken hold of him.

We have seen these contradictory and incoherent feelings in previous works by Gjergjo: powerful dramatic struggles, youthful leaps, bursts of energy, and—at the same time—feelings of tragedy and sadness. The painter draws more from his own meditations than from our own social reality. The epic of his most recent painting is not an innovation, but a new variation on the artist’s central idea, with a more adequate subject and theme: a more mature work conceptually and artistically.

Gjergjo’s painting expresses itself by specific aesthetic means: the ideas take artistic forms and become concrete through color, light and shadow, pictorial style, and composition. This is one of the merits of this painter and of a entire group of other painters who are now in the process of advancing our art. A few technical mistakes weaken the aesthetic perception of the painting, damaging the interaction of the beauty of the colors, of light and dark, etc. But this, let us say in passing, is a problem with many of our painters and—keeping n mind the way in which a painting communicates with the spectator—cannot be ignored by the artist without artistically damaging the resulting work. Edison Gjergjo has managed to create a work that draws you in, that holds you with the intensity of its colors and contrasts and with the expressiveness of his style, even if this expressiveness here and there become exaggerated. In this manner, he has managed to create an extremely moving figure in that of the rhapsodist, who is characterized by an almost inhuman monumentality. However, this figure is not without connection to reality, especially if we keep in mind the degree to which our singers physically take part in the interpretation of their songs. The feeling of tragedy has also touched the partisans, who have the character of strong, brave warriors tested by battles. The psychology of the young female partisan and her connection to the scene is slightly unclear. But perhaps not everything in a work of art can be explained with a great degree of exactitude.

Without a doubt, the painter has greatly exploited the experience of Expressionism—which is connected with moments of tragedy and sadness—without succumbing to the melancholy of that movement. He has also exploited the experience of Cubism, especially in the treatment of the landscape, in order to arrive at universal forms that suggest monumentality but retain their connection to the suggestion of reality. Whereas in the treatment of the figures, and especially of their faces, he has taken to heart the lessons of classical painting. All of these factors make the work eclectic and damage, without a doubt, both the expression of the painter’s ideas and the unity of the work. Thus, it is impossible not to damage the content of the work as well. The unity of a work does not exclude complexity of emotion. A work without complexity risks being a poor work. But unity requires the full expression of the conceptual and emotional content of the work.