I was recently prompted—after re-reading Enis Sulstarova’s insightful essay “Mbijetesa e Përditëshme nën Komunizëm” in Përpjekja 21—to actually read De Certeau’s The Practice of Everyday Life, a text I confess that I had previously only read the introduction to. This was in part because I have always felt a (rather kneejerk) ambivalence towards De Certeau’s thesis regarding how the “tactics” of everyday life function in relation to the “strategies” of systems of authority. Part of my ambivalence comes from the fact that I think De Certeau often calls practices “subversive” could just as easily be called “collaborative” (though this would truly problematize the use of the term of “heroism,” no matter how much De Certeau wants to posit a new image of the hero). I think that his identification of certain “ways” (of reading, cooking, walking, and so forth)  as falling outside the dominant system of authority/socioeconomic paradigm comes from a failure to sufficiently conceptualize the complexity of systems of authority, not actually from the discovery of the limits of these systems. At the same time, many authors seem to face difficulties when attempting to elaborate concrete examples of the practices De Certeau repeatedly insists are so elusive. In light of Sulstarova’s essay (which is admirable in its efforts to provide real examples, but still reads more as an exercise in theory rather than an examination of phenomena), I have been thinking about examples of everyday, anonymous “manipulation and enjoying” in communist Albania. And I think I have found a rather interesting one.

Last summer, I was lucky enough to acquire (from some very good friends in Albania) several issues of the journal Nëndori, the monthly periodical of the Union of Writers and Artists under communism. Most of the issues seem to have come from the same personal collection, an assumption I make based on the fact that many of them were individually wrapped in protective paper coverings, with the date written on the paper covering. (They are not, however, stamped on the inside of the cover with a personalized “This book is from the personal library of________”, as are many of the old books from the communist period that I’ve acquired.) When I first got the collection of Nëndoris, I thought it interesting and encouraging that the previous owner showed such concern for the preservation of books (a value, sadly, that seems to have been more prevalent in communist Albania—at least among those who owned books—than it is in Albania today). 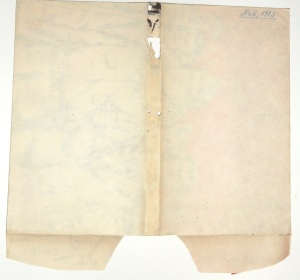 The books were not wrapped in just any paper, however. Most of those that were bound were wrapped in propaganda posters, which had been carefully cut to tightly wrap the individual copies of the journal. (They were wrapped so that the blank backs of the posters were on the outside, with the images concealed.) While the art historian in me is of course dismayed at seeing the use to which the posters were put—it’s not the condition I would like to have found them in, cut up and folded around books—their use does, I think, raise a number of important questions of the kind that De Certeau’s theory is trying to get at.

Where exactly do the propaganda posters re-purposed as book covers fall in the typology of practices that De Certeau wants to bring to our attention? Certainly, the fact that they have been used to wrap books, and thus would appear to be linked to the act of reading. Of course, it is also possible that the conservation of the volumes of the journal was linked to the drive to preservation but not necessarily to the drive to consumption. Perhaps the anonymous owner of the volumes never read them, or read them once, dutifully wrapped them in the posters, put them on a shelf, and forgot them. In any case, the care evident in the cutting and folding of the posters to perfectly wrap the journals was striking. What is truly striking, to me at least, is the way the use of the posters shows a casual disregard (if that is not too strong a word) for the imagery of the regime while it paradoxically acts to preserve the words of that same system.[1] This paradox represents, I think, something of the difficulty of pinning down whether or not such a use of the posters can count as “subverting” the communist system of strategies. As is so often the case, it is an act both subversive and collaborative: the owner of the books repurposed images with no regard for their impact as images—since the images were hidden in the wrapping—but did so in the interest of honoring and preserving a different form of the same propaganda present in the images themselves.[2] This raises a question not just about the status of words versus images, but also about how this “everyday” (re)use stands in relation to the power of the communist system in Albania. Should it be seen as an example of that system’s ingenuity at perpetuating itself even in the most mundane acts (one cuts up posters to save the words of the Party)? Or should it be seen as an irregular (I would not say rebellious or subversive) act of consumption, which uses (and uses up) the ideology of the regime in a way that weakens it by hiding it away, cutting it up, fragmenting it, disrespecting its privileged role as image of the New Life?

Recently, I have been unfolding the pieces of poster and using them to decorate my own walls. In the course of doing so, I was able to piece together 3/4 of one of the posters. In doing so, however, I realized that the three pieces I had, while all pieces of the same image, were not from the same poster—which thus frustrated my own attempts to make the images perfectly align. This, it occurs to me, is a perfect metaphor for the difficulty of examining evidence like the posters and their re-use. Reconstructing the motivations for such practices is always part of a new act of repurposing, one that is most accurate when it preserves the subtle evidences of dislocation and disjuncture—even if the significance of those disjunctures is not always, and may never be, clear.

I assume that the use of the posters dates from the communist period (and not afterwards) primarily because of the amount of wear on the posters and the Nëndori journals themselves. Most of the posters appears to be from the mid 1980s, celebrating various 40th anniversaries. Below are several images of the poster fragments opened up. 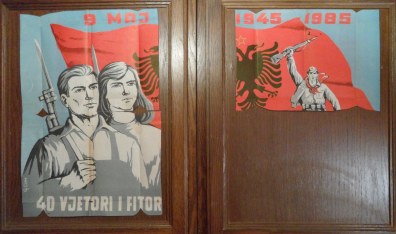 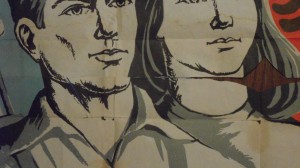 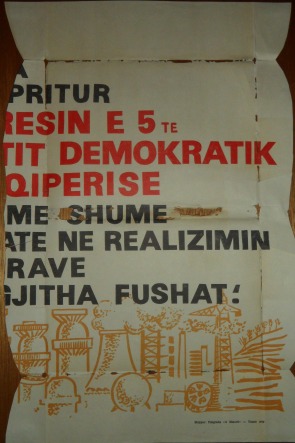 [1] Of course, there is some irony in the fact that Nëndori was a journal that also devoted many articles to the visual arts.

[2] It is worth noting that since several copies of the same poster were used, the owner may indeed have preserved the posters as well—but only one copy, the others of which s/he used as wrapping.