Today’s post is a full scan of Spomenici narodnooslobodilačke borbe i revolucije SR Srbije 1941-1945 [Monuments of the National Liberation Struggle and Revolution in the Republic of Serbia, 1941-1945] (Belgrade: NIRO Eksport pres, 1981), edited by Razumenka Popović Zuma. The volume contains an extremely thorough (perhaps exhaustive) catalog of monuments dedicated to the Yugoslavian antifascist struggles created in the Republic of Serbia and the socialist autonomous provinces of Vojvodina and Kosovo. The book includes information on the locations, dedications, and inscriptions of monuments of all shapes and sizes, from large-scale works documented in recent photographic surveys of Yugoslav monuments to smaller plaques and obelisks in villages and neighborhoods. 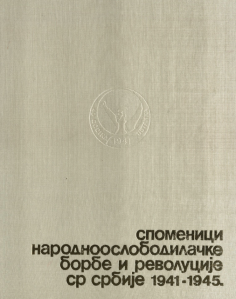 The book abounds in photographic documentation (though in black and white, and frequently low-quality reproductions), but of course the sheer number of monuments prevents complete visual documentation. The volume may be seen as a valuable counterpart to more recent publications such as Lapidari (edited by Vincent WJ van Gerven Oei, New York: punctum, 2015), which contains comparable information (and more complete photo documentation by Marco Mazzi) of socialist Albanian monuments to that country’s antifascist struggle.