Hoxha’s pyramid in Tirana, the capital city of Albania, presents a curious problem. It stands as a symbol of something that many want to forget, for many reasons. Many have called for its destruction, as a symbol of a past that Albania and its people must move beyond. Others have called for it to be preserved, as an integral part of that history—good or bad. The debates surrounding the pyramid suggest the dangers of both remembrance and forgetting. Can the pyramid bear witness to the past without glorifying it? Can the pyramid be forgotten without losing the lessons of the past? These are among the questions the pyramid raises. But do these questions really touch upon what the pyramid is? When we ask these questions, are we really asking about the work of architecture itself, the pyramid?  Do these questions reach the heart of what the pyramid says to us? This is what we must discern. So, let us do what Heidegger does and “go to the actual work and ask the work what and how it is.” 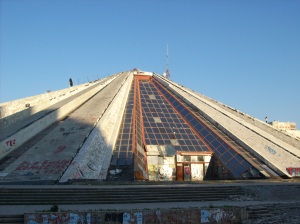 The pyramid is located at the corner where the ring road and the national boulevard intersect in Tirana. We would say, it stands there.  The pyramid stands. On what does it stand? It stands on concrete, hard and flat. And beneath that, it stands on the ground. The ground is what it stands on, what holds it up. At the same time, the pyramid reaches upwards, or it rises.

The pyramid towers (though certainly not in the same way as the skyscrapers that surround it and hem in its horizon), and in its towering it reaches. What does it reach for? The sky, or skies. All this seems absurdly simple. What about the skyscrapers around the pyramid, the Raiffeisen bank tower, the Citibank and Banka Popullore towers? Don’t they too reach for the sky and reach even higher? Don’t they scrape it—or, as the Albania word rrokaqiell implies, don’t they grasp it? Why are we pondering some pyramid which reaches for the sky and does not even reach as high as what surrounds it? In this way, the pyramid already looks like another kind of symbol: though it towers, it does not tower as high as the new towers which have sprung up around it. The dictator’s intended museum cannot even stretch beyond the grasp of a collection of bank towers. But here again, we speak about the pyramid as object and symbol.

The pyramid rises and with it our gaze rises—to the sky. The pyramid brings us from the ground (on which it stands) to the sky. The pyramid gathers. Here we touch upon this notion of which Heidegger is so fond, the idea that the thing gathers “in its thinging” as he says. The pyramid, in being a pyramid, gathers. What does it gather? It gathers people. If we stand in the vicinity of the pyramid and look around, on a sunny day in Tirana, we will see other people: young couples, a police officer at the corner, a man selling newspapers at a kiosk. We see ourselves reflected in the broken mirrored glass of the pyramid’s windows. We are gathered, along with these other people. The graffiti covering the surface of the pyramid attests to the presence of others who have gathered there. We see photographs of the pyramid, of people gathered in protest, of overturned burning cars. A place where tourists gather, where youth gather, where protesters gather: the pyramid is all of these. In each case, however, the pyramid retreats again behind itself as symbol. A symbol of decadence; a symbol of strength; a symbol of culture; a symbol of culture squandered.

The “indignant” individual who draped a sheet across a sculpture near the pyramid—upon which a message was scrawled demanding to know why the pyramid had risen in the heart of the city when other “cultural” centers were forgotten—seems to have had just this symbolic nature in mind. We say “symbolic nature”, but this implies that the nature of the pyramid is that it is a symbol. Is this true? We must ask: does the pyramid gather us because it is a symbol, or is it a symbol because it gathers? If the former is true—and we may very well decide that this is so—then we must admit that the pyramid is fully dead to us, and to the people of Tirana. It is dead precisely because people do not “hear its calling” (as Heidegger would say) as a pyramid, in being a pyramid. However, we must first examine the possibility that the pyramid can only stand as a symbol because it first of all stands and gathers. 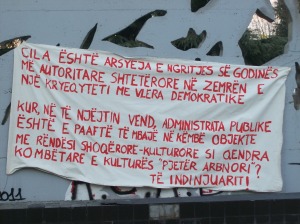 We have said that the pyramid gathers us. What else does it gather? It gathers the ground it stands on. We are not speaking about the way the flat expanse of concrete upon which the pyramid rests seems to blend with the somewhat expressionless façade of the pyramid in its rising up, the way in which the expanse of concrete distinguishes itself from the trees and grass nearby by virtue of the pyramid’s ugly gray prominence. Nor are we talking about the pure geometry of a pyramid, which rests on a wide base and culminates in a point. The very ground upon which the pyramid stands is gathered in its standing and taken up in its rising. All this happens regardless of what is inside the pyramid: whether it is the dictator’s museum or an empty edifice with graffiti and broken windows, the pyramid rises and with it its ground. That is to say: regardless of its symbolism, the pyramid gathers and rises.

Where does the pyramid reach in its rising? We have already said: the skies. So, the pyramid gathers the ground, the earth, and reaches upward towards the sky. At the same time, it gathers us to the sky. It gathers our gaze to the sky as it towers; in the same way it gathers the youth who climb over its surface and slide down to the ground again. It gathers us to the sky in conjunction with its ground, the earth, which is also our ground.

At this point, some of those listening to us are really upset. They insist: here you are, just picking and choosing a whole slew of Heideggerian vocabulary like “gathers” and “rises” and “earth” and “sky”, but if you jettison all that, where are you? You are just making the pyramid mystical, and therefore contributing to the symbolism you claim you want to avoid. At the same time, you are making a dangerous mistake in forgetting the historical actuality of this pyramid, which Hoxha had built to be his museum and tomb, so the people would have this huge symbol of him forever. You have reduced the pyramid to just some concrete triangle without a history, and I suppose now you are going to ask, Why destroy a triangle? Isn’t it pretty, rising up into the sky on the corner in that little park? And with that, you have gotten rid of everything objectionable about the pyramid, so who cares?

How are we to respond? First, let us admit that yes, we have been using a lot of Heideggerian words (or at least what passes for Heideggerian jargon in English). But would it really matter if we said the pyramid “rests” where it does, and “brings” the “concrete and asphalt” along with “all the people standing around” up into the “smog and clouds hanging over Tirana on this winter day”? We are still talking about the same thing: what the pyramid does in being the pyramid, and how it can do that. If the pyramid reminds us of the dictator, of the time of communism, of ugly architecture, it does so only because it first stands there and gathers us together with the earth upon which it stands. The pyramid can only “rise in the heart of the capital city” (as the banner draped in protest notes) because it gathers and rises.

Here we are going to say something else which will, no doubt, further enrage those who insist that we too are treating the pyramid as a symbol, as a symbol of Heidegger’s opaque mysticism about the work of art and the thing. We can say, after Heidegger, that the pyramid “juts up”, bringing the “earth”, its ground, “into the world”. Now we are on dangerous ground, so let us move slowly. The pyramid juts up. This, we can agree upon. We can even say that what makes the pyramid seem ugly is precisely this “jutting up”. The pyramid juts up into a flat expanse of concrete, into trees and grass, into the boulevard, into the traffic, into the surrounding towers which it cannot surpass in its jutting. In its jutting up, all those other things take their place around the pyramid. This does not mean that the pyramid defines them in some way by being the remembrance of the dictator’s power over all. It means that the horizon which the skyscrapers hem in, is a horizon because the pyramid raises its concrete foundation up to meet the open sky. It means that the trees which give shade, the yells of the furgon drivers departing for Elbasan, the police officers directing traffic turning onto the ring road—all these are in the opening that the pyramid sets up between earth and sky. The pyramid participates in the setting up of the world in which it can then come to be an object in a location and a symbol.

Only because of the way the pyramid does this gathering of earth up to sky could we ever interpret the pyramid as the presence of the bygone communist years, as the continuing presence of the communist system of power controlling the capital city. If the pyramid did not make this space, it could never then be seen to dominate it, nor could it recede from domination in being crowded out by the proliferation of bank towers and shopping malls.  The horizon that the pyramid breaches in its reaching up is part of the horizon of the city’s being this city.

What we have discovered about the pyramid does not negate the historical fact of its being constructed by the dictator and its intention to bear witness to his glory, nor does our discovery attempt to explain away the possibility that this bearing witness continues into the present, bringing the communist years to presence in its gathering. These interpretations of the pyramid are entirely accurate; they reflect the genuine cultural significance of the pyramid. Nor has our discussion been an effort to say: well, yes, that is one way of seeing the pyramid, but others have different views and for that reason perhaps it should not be destroyed. Rather, the richness of meaning associated with the pyramid can come only from something “deeper” so to speak. If the pyramid still speaks to us, it does so on the basis of its gathering and raising, its opening the space for horizons. Out of these horizons spring the interpretations of the pyramid and its “cultural” manifestation.

The task of our thinking has been to see just this as the ground of what the pyramid is and how it is, and thus to understand that insistence that the pyramid should be destroyed is not the refusal to hear a call that should not be heard—the nostalgic calling of the dictator’s power resounding today—but rather the failure to hear a call that must be heard—the richness of the earth’s calling us to be gathered in its meaning.